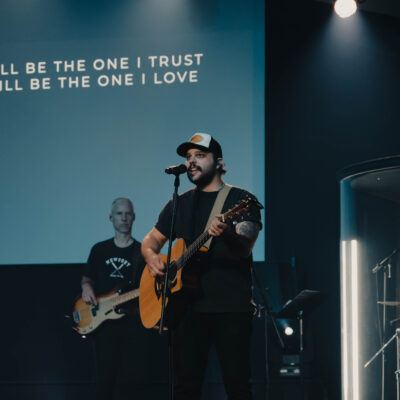 Wasn’t the last sermon series on faith great? I really, really enjoyed it! If you missed it, you can go back and watch it HERE.

I wanted to take a minute today and share a story with you. This story is from my friend Andrea and it starts all the way back in October when we went through our Revival series. After hearing one of our recent sermons and talking with my LifeGroup about the things that we are REALLY afraid of, I thought her story was really fitting. It’s a story about her journey of reconciliation and how being brave and leaning into faith through one’s fear can bring restoration to even what seems to be the most hopeless situation.

I hope Andrea’s story inspires, encourages, and maybe even leads you to step out in faith in a similar way (even when it seems scary)!

What is Christ speaking to you about, that you can do this week to reconcile a relationship?

On the first Friday of October our small LifeGroup, nestled cozily in our living room, pondered this question near the end of our time together. This was the second week of the Revival sermon series, and reconciliation was on the table, quite literally. After exploring more than a dozen passages of Scripture in the New Testament on the issue, we were faced with immediate application. Where do I need to practice reconciliation in my life? With whom do I need to reconcile?
Of the six of us in the room, most had an answer of some sort. A family member, a long-lost friend, and the like. When it came to my turn to speak, however, I drew a blank. I did not speak from a place of ignorance when I said I couldn’t think of anyone, for I’ve spent years obediently making amends where needed in my life, and I try to do it quickly—specifically to avoid the sometimes complicated and emotionally challenging task of reconciliation. We prayed together to close our session and went about our weekends.
The question stuck with me for a few days, hovering slightly in the background, and I prayed for God to keep my eyes and heart open for reconciliation opportunities. After all, in the spirit of revival, who was I to try to breeze through to spiritual victory at the top of revival mountain?

When I say suddenly, I cannot emphasize how struck I was by God’s clear revelation to me on the following Tuesday, four days after our LifeGroup met. It was a suddenly of biblical proportions, one that took my breath away and slowed the clock for a few languishing moments as I considered not only the person God revealed, but its implications in my heart, for my marriage, and for my family. God showed me my stepson.
Khalil is a nearly 26-year-old man with a job, apartment, and a car—all the trappings of young adulthood. He has Asperger’s, which I know has caused struggles throughout his life, though I did not enter his life until he was almost 18. He never lived full time with me and my husband, save for a few months at the turn of 2019 as he secured his job and apartment, and the relationship between us, and between my husband and him, has always been strained.
Issues of childhood trauma, well-worn before I entered the picture, along with mental health struggles and complicated family situations did not provide the greatest canvas on which to paint our blended family’s new path. While the details of the years of struggle and trial are too sensitive and tender to share in this format, what’s important to know is two significantly traumatizing incidents in our home, one involving the police and the last being in late Spring 2019, resulted in Khalil no longer being welcome in our home and I, personally, cut off all contact with him.
While my husband went on to some family therapy sessions with his son to reestablish their relationship, I hadn’t seen or spoken to Khalil in 2.5 years. Has it been that long? I whispered to myself, realizing the pandemic was a blur of slippery time, adding to the months—now years—I’d allowed myself to bury the issue. I’d gone to therapy to process the trauma from the incidents and move on with my life and, so it seemed, I had left all notions of reconciliation in the dust. We’d attempted family therapy with myself, my husband, and my stepson, and made it through two sessions before the contentious nature became too much for me and I shut the door again.
To make matters more complicated, Khalil is an atheist. While he’s typically been respectful of our faith, there have been times where he’s been downright combative and dismissive about it. My husband and I never engaged in arguments about our faith with him—we just continued to show love, grace, and mercy whenever we could. However, my heart had hardened around the issue of my stepson, and God knew it.
When I realized I hadn’t even considered my stepson as our LifeGroup chatted days before, I was startled. I didn’t just avoid saying his name or ignore the issue—he had been locked so far away in my mind that even with Scripture open before me it took four days for his name to find its way to the front of my mind. After that shock wore off, a stomach-sinking feeling took over. While I hadn’t thought of Khalil in those moments, I knew without a doubt my husband had. Not only has this heartbreak been on his mind every day for the last 2.5 years, but I knew with every fiber of my being that he thought I was going to talk about his son that night in LifeGroup, and I knew in an instant it broke his heart that I hadn’t said a word.

I now had two tasks of reconciliation before me, and I went first to my husband.

In earnest humility I admitted to him that God revealed to me my blind spot and hardened heart. I was right, Charles had indeed thought of Khalil when it got to my turn to speak on Friday, and he was saddened I hadn’t. He explained he didn’t bring it up to me because he knows how hurtful the situation is and he did not want to push me on it. I apologized for my ignorance and hardness, without making any promises for next steps I was going to take, and he graciously accepted.

Over the next several days I prayed, and by Saturday afternoon, I knew what had to be done. On our anniversary weekend away, amidst the backdrop of both Cape Cod and complicated health news for my husband, and over a buttered lobster dinner, I reached my hand across the table to clutch my husband’s. With tears in my eyes, I told him it was time to move—to have movement—in the “Khalil situation.” I admitted that I didn’t know what that would look like, except we would need at least another meeting with our family therapist, but I knew I couldn’t sit, hard of heart, anymore. I admitted to him that, above all else, God had called me to reconciliation here—it was time. But, in a close second, it was our job to model reconciliation and grace and mercy in such a tender situation to illustrate God’s love and the power of the Holy Spirit. While I’d always assumed it would fall on deaf ears with my atheist stepson, it is not my job to decide how and when the Holy Spirit breaks through. Whether or not this would be the time, I had to act in spiritual obedience.

Of course, there would indeed still need to be boundaries, discussions with the younger children who, by the way, had been asking to see their stepbrother for many months, but the next step was indeed a step, not more withholding.
My husband, overcome with emotion, grappled for words, for understanding. I was unequivocal in my assertion that I was humbled by the revelation of my hardened heart, and it was only when I recognized it that God could move through the pain, and I could see a path forward. Forward was the word that kept coming up. “I don’t know what the next step is,” I’d repeat, “Only that it’s forward.”

Within a couple of weeks, the three of us met over Zoom with our therapist for what turned out to be a quick session. I emphasized to my stepson that I was not interested in holding a grudge. He’d demonstrated numerous times over the last 2.5 years that he’d been receiving help for his issues, and I acknowledged the couple of times he reached out to me in apology. He expressed understanding of the trauma he caused, as well as an understanding of the path I took to get to where we were that day. I had no dread heading into the appointment because I knew God was behind this step forward. The appointment ended with a date set for him and his younger sister (who lived with us through high school and regularly visits) to come for brunch at our home.
That day came and went in a breeze. The seven of us were under one roof together again for the first time in nearly 2.5 years. The brunch was filled with laughter, tenderness, and bacon. Moreover, God’s grace and mercy covered the whole day and all of us. We are now looking forward to continual next steps that allow for further reconciliation and mending of past hurts. Done in the spirit of obedience and with the backdrop of grace and God’s love, I know we are being cared for. I trust the process, because I trust God.

Isn’t that amazing?? I hope you were encouraged by that as we press on into this year!

Maybe you have a similar story. Did you know that you can share it with us? Visit lifepoint.online/stories to share yours!

Lastly, I want you to know I’m praying for you. Our whole staff here at LifePoint is praying for you and we are FOR you. If you have a specific prayer request, please click here and let us know!

Want to receive these devotionals in your inbox each week?